Pavement Parking – Should it be banned? 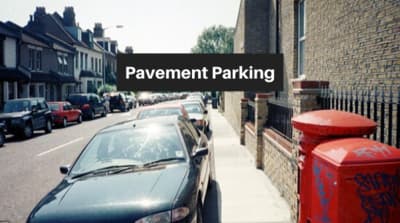 It is in the UK news that a ban on pavement parking could be introduced outside London after the department for transport last year called for it to be introduced to help pedestrians. In this article we are going to discuss why motorists park on the pavement and the consequences this has on pedestrians, as well as the consequences that a nationwide ban could have on motorists.

What is pavement parking?

Pavement parking involves someone parking their vehicle on pavement or public walking area. This is highly controversial as the pavement is for the public to walk and parking on pavements often restricts the public from walking down paths. To combat this a potential ban could be put in place, completely restricting cars from being parked on the pavement.

We're calling for a clear law on #PavementParking to keep pedestrians, particularly those with sight loss, safe.

Let’s make it known that pavement parking should be the exception, not the norm. Find out more and sign our petition https://t.co/iTDrjxNM4R #MondayMotivation pic.twitter.com/KmxxEakW11

What is the ban?

There has been a pavement parking ban in place in London since 1974 restricting road users from parking, unless there is a sign in place that permits it. London boroughs and the City of London can issue parking tickets of up to £70 if this ban is breached. If a nationwide ban is put in place it will emulate the current ban and make it enforceable across the whole of the UK, not just London. Mp's called for this ban last year after it was addressed following a Commons' Transport Select Committee report.

Why do people pavement park?

There are many reasons why people pavement park. Often people pavement park not through choice, but because there are not enough parking facilities. Many places of employment, schools, shopping facilities and housing areas cannot cater for the growing need for parking spaces and car parks. If this ban is passed and local authorities have the power to penalize the public for parking on the pavement, then there must be an improvement on the availability of parking spaces. All this being said many people are guilty of pavement parking the first chance they get and they are not aware of the unintended consequences.

Who does pavement parking effect?

Parking on pavements can have consequences for motorists and pedestrians alike. Firstly, pavement parking blocks the pavement which is for public use. If a member of the public cannot use the path then they will have to resort to walking down the road, putting them in danger and blocking the flow of traffic. People in wheelchairs are somewhat the most affected by this as they cannot simply hop around the obstructing car, leaving them in a difficult situation. Homeowners are also affected. Road users may be resorted to parking outside of houses, making it difficult for homeowners leave their homes and take out the bins.

Are you guilty of pavement parking?

There is a just reason for imposing this ban outside London. I am sure that a lot of people reading this article are guilty of pavement parking and do not think twice about the unintended consequences of leaving your car parked on the pavement. On the other hand, many drivers only pavement park out of necessity not choice. Pavement parking is something that people outside London have done for years without a second thought, therefore there will be no quick fix meaning measures must be taken to avoid total parking chaos.

Did you enjoy this blog post? |
19 people found this review helpful