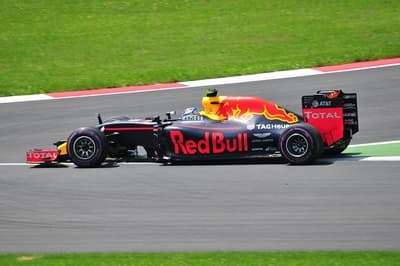 In 1986, Williams took another leap forward with the unveiling of their state-of-the-art Williams Honda FW11. It set the standard for all others to follow and dominated the season. Nigel Mansell won 5 of the championship rounds while his Williams teammate, Nelson Piquet, won four. The twin turbo-charged Honda 4 cam V6 engine used a mass of electronic micro processing equipment to handle boost, ignition and injection requirements.

Driver-to-pit radio communications and car-to-pit in-race telemetry enabled the pit crew to “watch the gauges” while also monitoring the drivers’ reaction to instructions and advise. It was revolutionary to the sport who had never previously experienced communication on such a scale. It allowed for unprecedented access and monitoring for the teams who were previously limited to video footage and driver feedback once in the driver returned to the paddock.

In 1992, further aerodynamic breakthroughs saw the cars going lower, longer and more streamlined than ever before. A high air intake that towered over the cockpit helped force air down and out of the rear of the car for added downforce; an additional that is still seen on cars today.

Braham’s very colourful BT60 saw several upgrades to their chassis throughout the season however, even with the addition of Damon Hill as a driver, the team failed to make an impression and their best finish was 11th in the Hungarian Grand Prix. This was the last Brabham to participate in a F1 Championship race after the team ran into financial difficulties. They had been involved with the sport for over four decades.

Second only to aerodynamic purposes, the next largest contributing factor to the shape of a Formula One car is to comply with FIA regulations. Over the years, regulations have dictated specific measurements for almost every part of the car, from the rule that the roll bar must be 5cm above the drivers’ helmet (1968), to the front wing endplates being a minimum of 10mm thick to prevent damage to the cars in front (1996), the list is extensive.

The primary concern, of course, is safety. Between 1963 – 1997, there were 16 driver fatalities and 27 injuries sustained during championship events. Many of these drivers were at the very pinnacle of the sport, often competing for the title or were very well respected and accomplished drivers, such as Ayrton Senna, Gilles Villeneuve, Ronnie Peterson, Jochen Rindt and Roland Ratzenberger to name but a few.

Throughout the 70’s and 80’s, tyres got larger as the cars got faster, until the FIA sought to slow the cars down in a bid to improve safety. In 1993, a regulation was introduced that stated the maximum width of the rear tyres on the cars was to be reduced from 18 to 15 inches, thus reducing grip and ultimately speed. It was not until as recent as 2009 that fully slick tyres were re-introduced into F1 after previously being banned in 1998 when front tyres were required to have three grooves and rear tyres were required to have four, with a further groove later added to the front tyres to slow the cars down even more.

Today’s Formula One cars are somewhat of a technical marvel and an aerodynamic masterpiece. Every single part of the car has seen extensive development since the inaugural season in 1950. Safety is the number one priority in the sport nowadays as shown by the low number of serious injuries and fatalities that have occurred since the events of Imola, 1994 where both Ayrton Senna and Roland Ratzenberger lost their lives in the same weekend. Since then, only one driver has lost his life racing in F1, Jules Bianchi, who died 9 months after sustaining head injuries during the Japanese Grand Prix during the 2014 season.

The front wing on this 2016 Lotus E23 Hybrid bares almost no resemblance to the first front wings introduced in the late 1960’s. Very few parts of the cars have remained almost unchanged for decades. One such example is the air intake above the driver. The dry-weather Pirelli tyres currently in use for the 2016 season have 5 compounds for the teams to choose from. They range from, ‘Ultra Soft’ to, ‘Hard’ specifications. Each possesses varying levels of grip and durability.

The Evolution Of Formula One Tyres

Tyres have evolved significantly since the conception of Formula One, however, in recent years, these changes have been minimal and often limited to technological developments, such as construction materials, which are invisible to the naked eye. Many additional changes have been called for to the tyres, including the greatly debated topic of increasing the wheel size from 13 to 18 inches. “The teams are actually very consistent by saying that they want to stay with 13 [inch wheels]”. There is, however, a greater consensus for a wider rear tyre. The only area where they all seem to be very much in agreement is going for a wider rear tyres, which when you see it on a car looks pretty dramatic”. - Paul Hemberry [Pirelli Motorsport Director] The proposal would see the tyre width increased from the current 375mm, up to 420mm. Current FIA regulations state that the tyres must be between 305 – 355mm on the front and 365 – 380mm on the rear on today’s Formula One cars. Technology will continue to shape the Formula One cars of tomorrow. FIA regulations are constantly looking to improve the spectacle of the races, while ensuring the maximum safety for the drivers, officials and spectators, therefore they too will continue to influence the appearance of the cars. Tyres will always play a significant role, not only in safety but in speed and handling.

Did you enjoy this blog post? |
5 people found this review helpful