With every new technological breakthrough, comes a greater desire by the teams and drivers to shave off that extra tenth of a second from their lap times. This, along with enforced rules and regulations, has seen some radical changes to every part of a Grand Prix race. So just what makes a Formula One car so special? 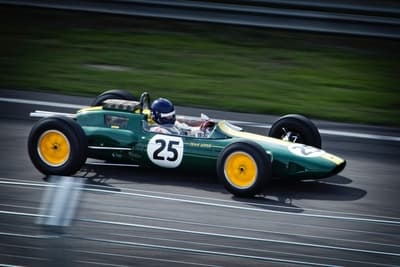 Within this two-part blog post, we will analyse the history of Formula One tyres throughout time and monitor how the combination of technology and innovation has helped shape the future of Formula one. In this first blog post we will look at the years between 1950-1980, while in our second blog post, we will look from 1980 onwards, in an attempt to analyse why current Formula One drivers such as Lewis Hamilton and Nico Rosberg have a whole lot to be thankful for.

Despite decades of European Grand Prix races, the first season of the World Championship of Drivers was organised in 1950. The inaugural championship was dominated by Alfa Romeo, between three of their five drivers and it was their Italian driver, Giuseppe Farina, who clinched the title in the final race of the season at Monza. Alfa Romeo had captured the hearts of the supporters and managed to get everyone excited about racing. While the cars were a far stretch from the engineering marvels they are now, this was genesis for modern day Formula One.

With very limited knowledge of aerodynamics, 1950’s Formula One cars possessed oversized front grills. While this was effective in allowing a greater air intake to the radiator, it will, unknowingly, have had an adverse effect on drag, preventing the cars from reaching their top speed.

In terms of the Formula one tyres, skinny, treaded tyres were used as standard on both the front and rear on the early Formula One cars and were sized 5.50-16. In modern day equivalency, they were similar in size to those fitted to a Ford Focus. The tyres available were manufactured by premium tyre brands such as Dunlop, Pirelli, Englebert and Firestone.

p>The Alfa Romeo 158 was raced by Juan Manuel Fangio in the World Championship of Drivers in 1950. This was a race-only build that was unmatched anywhere else in the world for its speed and handling ability. The following year, Alfa Romeo upgraded the 158 to the 159 and took the supercharged engine up to 420bhp, an extremely large amount of power at the time.

The Formula One tyre that were used for these first Formula One cars were very thin compared to those that came later and even by those seen today. Early in the 1960’s, teams began to realise that by having no grooves in their tyres, meant a greater contact patch with the track. This increased grip significantly and resulted in much quicker cornering and greater acceleration. Even so early in Formula One’s history, teams were already looking at ways to improve their cars and tyres.

[1969] The Introduction Of Front and Rear Wings

By 1969, Formula One had already begun to take a leap forward in aerodynamic technology, which led to the introduction of a front and rear wing on the cars. These looked very different to what people were used to seeing on Formula One cars and appeared to be a radical addition, however, the lap times dropped significantly. It was soon very apparent that investment into aerodynamics was going to prove to be a necessary and welcome improvement to the cars. There were many changes, most notably, the addition of the front wing. While the design has been revised many times, this has come to be considered the norm on every Formula One car.

The nose of the car extended significantly beyond the front wheels.The purpose of the front wing was to deflect air over the tyres and into the enormous rear wing for additional down-force. A rear wing had also been added to the cars providing a massive amount of down-force, which allowed the cars to maintain much higher speeds through the corners. The increase in down-force saw a requirement in additional rear grip. This was addressed by increasing the size of the rear tyres, ensuring a greater contact patch with the track.

Around half of the circuits had Armco barriers surrounding large portions, if not all, of the track. This was due to a growing concern for driver safety and to reduce the chance of driver fatalities. Some of the tracks, however, such as Spa in Belgium, refused to improve safety at their circuit, despite having some steep drops and unprotected obstacles around the track. Jackie Stewart undertook a thorough inspection of the track before the Belgium Grand Prix and concluded that it was dangerous and that necessary safety measures should be implemented before a race was undertaken. Again the circuit officials refused as they were unwilling to pay for the upgrades. This resulted in the circuit being boycotted by the teams and the race was eventually cancelled. It was later reintroduced to the calendar the following season after circuit officials installed Armco. Despite this, it wasn’t until the 1972 season that every race on the calendar was undertaken on circuits with safety features on them. Unfortunately, several drivers had lost their lives during this period, including the 1970 championship winner, Jochen Rindt, who is the only driver to ever be awarded the World Championship title posthumously. Rindt was killed in a crash during qualifying at the Italian Grand Prix in Monza while driving his Lotus 72 with the wings removed.

1979 saw the adoption of ‘wing-cars’. With so much emphasis on aerodynamics and down-force, teams were searching for car designs that would maximise their efforts. The photograph below is the Tipo 179, driven by Andrea De Cesaris in the German and US Grand Prix during the 1980 season.This was Alfa Romeo’s first ‘wing-car’ design and many other teams had followed suite with similar designs around the same time. These cars are recognised as the first to distinctly resemble those used in modern day Formula One. Goodyear tyres were the Formula One tyres used by the Alfa Romeo team. Goodyear were one of only two Formula One tyre suppliers available to the teams for the 1980 season, the other being Michelin.

Catch the second part of our blog regarding the the evolution of Formula One from 1980 to present day.. In this blog post we analyse the technological leap forward to see why technology will continue to shape the Formula One cars of tomorrow.

Did you enjoy this blog post? |
6 people found this review helpful