Electric cars have gained a lot of popularity in recent years, with you being able to spot them on roads around the UK on a daily basis. This spike in popularity has come at no shock with electric cars practically being the future.

This future has also been cemented even further with the UK government seeking to ban the sale of petrol and diesel cars by the year 2030. There are many positives of owning an electric car with them being easier to maintain, better for the environment and cheaper to run.  The general public is clearly aware of these benefits and is keen to own an electric car as seen in a poll set up on Tyre Shopper.

The Guardian reported that despite the COVID-19 pandemic, global sales of electric cars are continuing to accelerate, with electric cars becoming increasingly popular. We asked 277 of our customers which type of car they would like to purchase next. Our survey showed that despite the majority of drivers owning a diesel car if money was no object, the overwhelming majority would want to prefer either an electric or hybrid vehicle as their next purchase.

Embed "The Increasing Popularity Of Electric Cars | Tyre Shopper; on Your Site: Copy and Paste the Code Below

Within the survey, we asked three questions with all of the questions bringing in some interesting findings regarding UK drivers.

What type of car do you currently have?

The answers from our respondents were as follows: 60.9% owned a diesel car and 35.5% owned a petrol car. Interestingly the percentage of people who owned either a hybrid or electric car was under 4%, with 2.5% of respondents stating that they own a hybrid car and only 1.1% being an electric vehicle owner. 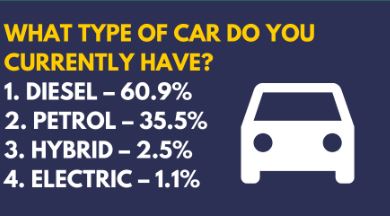 What type of car are you likely to purchase next? 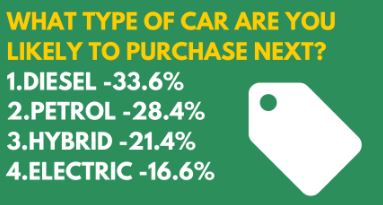 If money were no option, what type of car would you be most likely to purchase next? 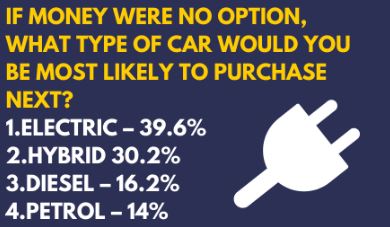 As seen in this data the majority of people currently own petrol and diesel cars and would continue this trend when buying their next car. What makes this interesting is that when money isn’t an issue the majority of people opt for an electric or hybrid vehicle. This indicates that one of the main issues people experience when buying an electric car is the price. But is this really an issue?

How expensive are electric cars

When it comes to the initial cost of an electric vehicle it can be more expensive than buying the car over their combustion engine counterparts. This is often what puts people off electric vehicles, however, they do not consider the cost of the vehicle over its lifetime.

The more expensive purchase price is compensated when using the car over time. One aspect of this is fuel. With an electric car, you obviously do not need petrol or diesel as fuel but instead electric. The price of charging your electric car at your house to a full charge will cost only between £8 -£9.  As well as this, fast-charging stations have never been more easily accessible and they charge approximately £6.50 for a 100-mile charge.

Benefits of owning an electric car

So with the main obstacle that puts people off buying electric cars tackled, it’s time to give you some more benefits of owning an electric car.

This is perhaps one of the more obvious benefits of owning an electric car but is one of the more important ones. We live in a day and age where we can see the impact that humans have had on the environment with global warming. A factor of global warming is the harmful emissions that are expelled from the exhausts of cars with combustion engines. By opting for an electric car you are reducing your carbon footprint and doing your bit for the environment.

Many drivers of electric cars note that they experience much better performance from their electric vehicle. This is due to improved acceleration as power goes straight to the wheels. This will make your vehicle zippier and more responsive. Electric vehicles can also feel better when handling due to a low centre of gravity that is caused by the heavy batteries being mounted to the floor.

Driving comfort is another aspect of electric cars that is very enjoyable for owners. A car without an engine results in less noise and vibrations, making the overall driving experience smoother and more comfortable. This can be further enhanced with tyres specifically designed for electric vehicles such as the Michelin Pilot Sport EV Acoustic.

Did you enjoy this blog post? |
8 people found this review helpful