Does England Have A Pothole Problem? 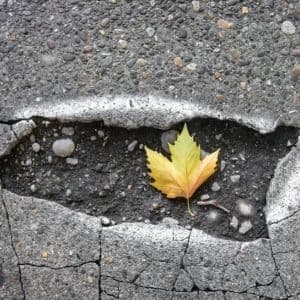 Nobody likes a pothole.

If you ask drivers what annoys them most about driving, poor road conditions are sure to be somewhere near the top of their list. Uneven or damaged roads don’t just make it more dangerous to drive, they also cause a huge amount of damage to cars every year which drivers end up paying for out of their own pocket.

It seems like the roads never get better, only worse. New potholes appear out of nowhere, uneven stretches get worse, and surface flooding becomes more common. But are things actually deteriorating?

We were interested in finding out just how bad the road conditions are in England, so we ran a survey with 500 respondents and looked into government data to get the full picture. Here are our findings, brought together into a handy infographic and summary.

An overview of England’s roads

Roads in England are all classified with a letter system, splitting them into categories that represent their importance and average traffic levels.

The largest roads, usually linking cities, are motorways which are named with an M and a number.

After motorways come A roads, the highest traffic roads that aren’t motorways. These are often dual carriageways.

Following A roads are B and C roads. These are sometimes called distributor roads, and they have lower traffic densities than motorways and A roads but are still important for getting around cities, towns, and villages. They’re the roads that most drivers use every day to go to the shops, commute locally, or visit friends and family, which is why we chose to focus on them in our research.

There are roughly 166,000 miles of B and C roads sprawled across the nine regions in England, so there’s plenty of road surface to get damaged. The government records road conditions every year, and we’ve collated their latest data (2017/18) so you can see at a glance which region had the highest percentage of roads that required maintenance.

To put it in context, that’s roughly the distance from London to Melbourne. Although this is a mind-blowing statistic, we had a suspicion that drivers might have different opinions on how many roads need repairing, so we ran a survey with 500 of our customers.

Are roads in England improving?

We thought that the best metric for comparing what the government thinks about road condition with what the public thinks was assessing opinion on changes in the last 12 months. We asked our 500 respondents whether they thought the conditions of their local roads had improved or deteriorated over the last year, and the results were fairly conclusive.

68.9% of respondents told us that their local roads had either gotten worse or stayed the same in the last 12 months, while only 31.1% said they’d improved. In every region of the UK, people felt that roads had generally deteriorated. 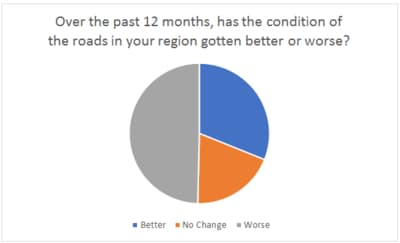 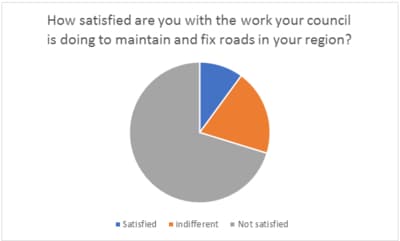 We wanted to compare this with what the government thought about their progress with improving B and C road conditions, so we looked at their historical data since 2007.

Their figures show a positive trend, with the percentages of roads they consider as in need of maintenance gradually dropping over the past 10 years and dropping or staying the same in most regions over the last 12 months.

It’s clear that there’s a huge difference between how well the government think they’re doing and public opinion. We wanted to find out why.

Curious to find out why everyone felt that roads were getting worse and were so dissatisfied with their councils’ work, we asked our 500 respondents if their car had been damaged by a poorly maintained road in the last 12 months.

The results were shocking, with a total of 54.2% of respondents saying their car had been damaged in some way by bad road conditions in the last year. 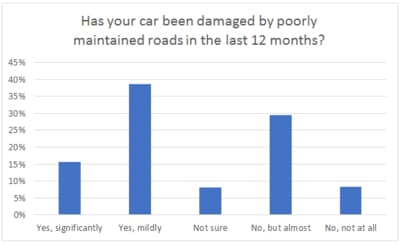 With an average repair cost for pothole damage of around £297 and roughly 32.5 million cars on the road in England as of 2018, even counting just the 15% of respondents whose cars were significantly damaged results in a total potential bill of £1,447,875,000 per year to repair the damage caused by poorly maintained roads.

With this in mind, it’s easy to see why drivers feel like the current rate of road improvements isn’t enough.

We were also curious about what type of damage to roads drivers were most concerned about to see where the government’s priorities should lie when it comes to maintenance. The results from this were also clear as day – potholes are the clear problem with 78% of people saying they’re the worst feature. 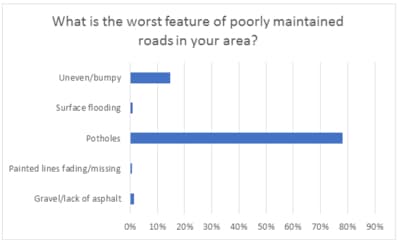 How will roads improve?

In 2016/17, the government spent roughly £866 million on routine and winter maintenance of local roads across the UK, which seems significant but actually only made up around 2.9% of the total spending on transport in the same time period.

Considering the overwhelmingly negative public feelings towards the condition of local roads in all regions of England and the huge potential cost of repairs that drivers face due to poor road conditions, perhaps spending on road maintenance should be increased.

Although the government statistics indicate a generally positive trend in local road health, it seems like the positive effects are being lost on drivers, with little to no confidence in council action and a dramatic number of cars being damaged.

As car tyre specialists, we know the importance of safety on the roads and, while drivers can take their own safety measures like choosing the right tyres and looking after their vehicle, road condition is completely out of their hands.

The potential benefits to the entire driving population of increasing the priority of road maintenance could be massive but will local authorities receive the funding to do anything about it?

Did you enjoy this blog post? |
21 people found this review helpful