The budget tyre clearly followed the looks and appearance of the high quality Continental Tyres original, not just in the tread pattern but also in the sidewall graphics. In fact, with a virtually identical tread pattern and styling, you would be hard pressed to see any difference. The average person in the street, without the benefit of specialist knowledge, could easily have been persuaded to purchase the fake, - especially when you consider that it is currently on sale in the UK at around £40 per tyre less than the Continental Tyres original. 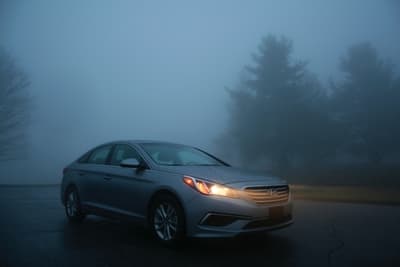 However, the presenter stressed that the problem is not about buying budget brands as such, It’s about the real things that differentiate premium products from a manufacturer like Continental Tyres but which may be invisible to the naked eye. For example Continental Tyres has made a considerable investment in the design of the tread pattern, which plays a crucial role in clearing water and preventing aquaplaning. But simply copying it is not enough. Because significantly, the biggest difference lies in the carefully chosen rubber and polymer compounds from which Continental tyres are moulded.

All of this was clearly brought home in a revealing demonstration involving a Volkswagen Golf fitted with the original Continental Tyres products. This was a series of wet braking tests under motor industry-approved conditions. In a test repeated seven times, the car was brought from 70mph to a standstill in a constant 1mm depth of water and the stopping distances recorded using GPS technology.

Following this, the Continental tyres were removed and the fake copies substituted. The tests were repeated under exactly the same conditions and alarmingly, the fake tyres performed significantly worse than the Continental Tyres originals. The facts are sobering. With the fake tyres on, the car was still travelling at 31mph at the exact point where it had stopped when fitted with the premium Continental tyres. In fact, the car travelled a further 14 metres – three and a half car lengths –before stopping.

This fact is of great significance to those using the motorways in rainy Britain and should not be lost on those who value their own lives and the lives of others. Remember that if you look at the actual cost of buying the premium Continental Tyres original compared to the fake, then over three years it works out at just £4.40 per month. On top of which, the Continental Tyres premium product will almost certainly give you higher mileage, better handling and a more comfortable ride. What price safety you might well ask?

Did you enjoy this blog post? |
20 people found this review helpful